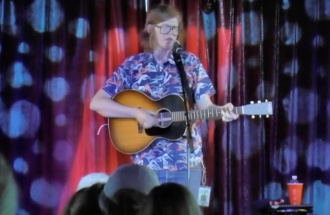 In the late 50s, songwriters Malvina Reynolds, Alan Greene and Harry Belafonte composed the touching, heartwarming, gentle  “Turn Around ;  in 1963 the duo Dick and Dee Dee turned it into a Top 30 Billboard hit.

Listeners might hear overtones of “Turn Around” in the opening notes of singer/songwriter Brett Dennen’s current Adult  Alternative hit,  “See The World,” a  delightful, original  4+ minutes that remind one how magical a good song can be.

The cut is from Dennen’s upcoming summer album release, his first in five years. The 41-year old Northern California artist told JamBase “This song has taken on a more powerful meaning after this past year. Now that the world is opening up,  I have both relief and anxiety.  Van (Dennen’s son) is the reason I wrote this song. To tell him it is more important to learn from himself than it is to learn from me.”

Dennen Facts & BG:
*. Acknowledges Paul Simon’s significant influence on his music.  Graceland is  one of Dennen’s favorite albums.[12]
*. Opened for John Mayer in 2008.
*. In 2008, was named by Rolling Stone magazine as an “Artist to Watch,” and Entertainment Weekly called him one of its eight “Guys on the Rise”.
*. Performed at the Newport Folk Festival and appeared on The Late Show with David Letterman.