Boomers (Still) Boppin’ to the Beat! 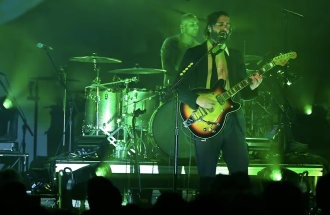 Four years ago, Boomer Music Update swooned over Lord Huron’s “When the Night is Over” and its early-rock vibe, and, here we are, swooning again, this time over the 4-man, Los Angeles based indie rock band’s newest single “Not Dead Yet,” with its 50’s and early-to-mid 60’s rock ‘n’ roll n’ rockabilly sound, its popped to #5 on the Adult Alternative chart.

“Not Dead Yet” is roots grounded rock n’ roll that’s been smoothed and polished, and that hits a nerve with Boomers who grew up listening to great stylists and songs, and affirms the band’s love and appreciation for rock n’ roll root music, and the influence of the early, classic, American “greats” and the “also great-but-just-not-as-famous” songs and singers, such as Gene Summers’ “Straight Skirt,” one of many influential but under appreciated songs from rock’s “golden era.”

Heads up: The video for “Not Dead Yet” is a “must see” 50s throwback: black and white with subtle, creative, digital enhancements, it’s dotted with cultural icons such as early, clunky TVs and white sports coats.

“Not Dead Yet” is the lead single from the band’s fourth album, scheduled for release next month.