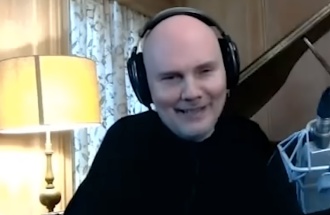 In the 33 years since first unleashing that distinctive “The Smashing Pumpkins sound,” the group has endured several break ups…members leaving/returning/reuniting.  As of right now,  they’re back on the scene with “Cyr”, already ranking  #18 on the  Alt music chart.

“Cyr”, the title track of the groups current album, (which came out at the end of Nov.) is French for ‘lord’ or ‘master,’ however,  when texting, the initials “cyr” stand for “clean your room.”

As far as the song’s lyrics?  Like, a story line?  We can’t figure it out, however, musically, lead singer Billy Corgan, who’s almost 54 y/o, draws sonically from the 80’s synth pop era of his youth with a flavor and texture of acts such as British trio Depeche Mode and their late 80’s/early 90’s sensation “Enjoy The Silence” (which has very respectable 220+ million you tube views, and is a very 80s 4-minute/40-second track, as is “Cyr”, which runs 4+ minutes).

Corgan co-founded The Smashing Pumpkins in 1988 with guitarist James Iha, and has written at least 20 of the songs they’ve recorded.