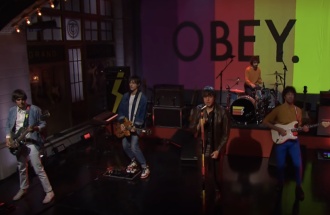 A  melodic vibe connects The Cure’s 1987 “Just like Heaven” and the current “Adults Are Talking” by New York band The Strokes, and although both are energy driven, their messages go in different directions.

When The Cure’s Robert Smith, (a Boomer!), co-wrote “Just Like Heaven,” the group’s first major American hit, he was inspired by a romantic trip to the sea-side with the woman he would eventually marry.

Spinning on that dizzy edge/

Kissed her face and kissed her head
Dreamed of all the different ways, I had to make her glow

To do the right thing but without recompense

The Strokes latest is #15 on the Adult Alt Chart, and is the follow up to “Bad Decisions” (Boomer Music Update https://boomermusicupdate.com/?s=the+strokes )