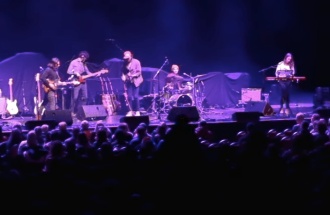 True, it’s trite, but Mt. Joy are almost  “indescribable” (folk-indie-rock)–and “Strangers,” their newest song, is almost indescribable, too—we’re linking it to Jefferson Airplane’s 1967 “My Best Friend.”  Lyrically the two songs differ but sound wise and melodically, there are similarities.

Both songs have a semi-other worldly, groovy, and complex sound. The Airplane were right for their time (and they don’t sound dated) but Mt. Joy is spot-on for today: the story line is lost love, the context is a harsh and heated world, the delivery is disjointed and opaque.  Sentences jab rather than flow.  Props to stand-out keyboard player Jackie Miclau.

And I did not want our love to be erased, but
Lord knows we chased it, love just rearranged us

(Not all the lyrics are that good.)

“Strangers” is charting a solid #10 on the Adult Alt format.

Following in their footsteps: “Strangers” is the first single from Mt. Joy’s recently released and highly scrutinized “can they deliver again?” second album, “Rearrange Us,” and “My Best Friend” was from the Airplane’s sophomore album, too.

Mt. Joy is four men and one woman, based in in Los Angeles, CA.