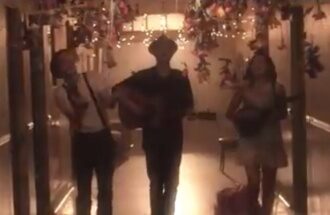 What’s in a name?  Apparently, a lot, if the name is Gloria, as we music-loving Boomers know:

In the 1950s it was The Cadillacs and their doo-wop style; in the 60s it was Them/Van Morrison and the classic rocker, “Gloria;” in the 80s Laura Branigan’s “Gloria” was a #1 pop hit…and here she is again, “Gloria,” by the Lumineers.

This “Gloria” is about loving an addict, and when to say “enough is enough.”  Despite that downer concept, the song is a major hit on Alternative formats and deservedly so, because this Gloria rocks with the best of them:  it’s mellow but up-tempo and the Denver based five-member band delivers a polished package: the sound,the lyrics, the music, the voices, the clarity–modern with  full acknowledgement of their folk-rock roots.

“Gloria” by the Lumineers is top 5 in the Adult Alt and top 10 in Alternative music charts.