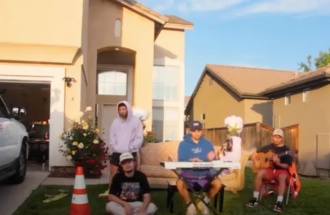 The band Peach Tree Rascals is three singer/rappers, a producer/mixer and a creative director.

Two years ago, Tik Tok exposure put their song “Mariposa” on the map, and now, all those new found fans have helped “Change My Mind” the band’s latest release, edge into the Alternative music chart just a few weeks after delivery.

It’s positive and fun and nearly indecipherable for Boomers:

Runnin thru my mind I’m only stopping for dro

We was getting robbed on the job by the weak man

Least I got my dawgs taking boss on the beat man

Actually, we don’t have to understand the words, because the music is the message, and it  feels good ‘n’ sparkly, much like the Canadian rockers Barenaked Ladies’ 1998 #1 hit,  “One Week.”  Though far from rappers, they, too, had a crazy set of lyrics and loopy music.

The Peach Tree Rascals:  Been around since 1988; met in high school in San Jose, CA.