“I know I’ll always be my greatest enemy…” 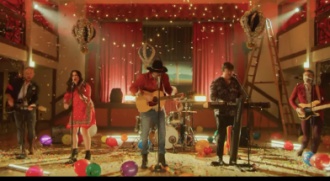 The Covid 19 pandemic has wreaked havoc on more than just business, government and cites, it’s taken a toll on our collective and personal mental health, a chaotic intro to the 21st century.

The weirdness of the past year effects each of us differently–millions of people, worldwide, grappling with isolation, uncertaintyand fear– many of them teens and young adults.

In 1965, a depressed John Lennon cried out with a generalized need for “Help” and wrote a 2-minute/15- second song that ended up ranking #29 on the Rolling Stone “Top 500 Greatest Songs of All Time,” an accomplishment that probably won’t happen for the six member Canadian rock band The Strumbellas, as they translate 2020 into a song.

“Greatest Enemy,” their new single, is up-tempo and energetic but not overwhelming; the lyrics are choppy and encompass both the general (the pandemic) and personal awareness, plus a nod of encouragement, inspiration and hope.

This might be my last trip, my life’s an asterisk
I’m trying to break out of this feeling like I’m in a casket
I can’t get past it, all of this madness
I wanna set my past on fire, I’ll strike a match and…