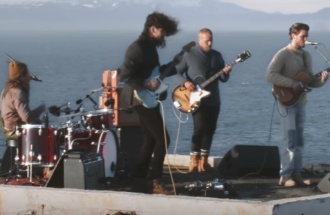 Four years ago, Kaleo, a 5-member roots-y blues-y band from Iceland that now resides in Austin, Texas, scored a double platinum single with “Way Down We Go.”

Their newest release, “Break My Baby,” is a throwback to the late 60s-early 70s blues- rock wave that swept across the musical landscape with bands like Led Zeppelin, Janis Joplin & Big Brother and The Holding Company, Steve Miller Band, Cream and Jimi Hendrix.

The story line to “Break my Baby” is an indictment of the music industry; the sound is  scorching, dramatic, hard driving and intense.  If you like that vibe, this song is a “must listen to.”

Kaleo  (pronounced “kuh-lay-oh) is from the Hawaiian word for sound.

“Break My Baby,” the lead track from the band’s new album, is #7 on the Adult Alternative music chart

The jaw dropping video was filmed atop a rock formation in Iceland, in the middle of nowhere, reachable only by helicopter. One wonders:  what was the point of that, anyway?