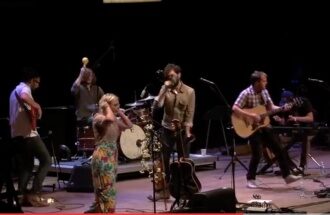 You can tell by the band’s name–The Head and the Heart–it has a vaguely hippy-dippy vibe –that this is a band Boomers can relate to, which is confirmed when you listen to their latest single, “Missed Connection.”

For starters, you can hear and understand the lyrics, clearly.

The Head and The Heart’s singer/guitarist/percussionist Jon Russell says the song was originally about his girlfriend but then it morphed into a reflection of the  bands roots–which is a a stretch–but the story-line isn’t linear, anyway, rather the lyrics are impressionistic and artistic…

Don’t tell me I lost a step

Criss-crossed in the wrong direction

Found myself in a conversation

From a missed connection

Some instrumental elements and the overall musicality and tenor of “Missed Connection” are also felt in ELO’s (Electric Light Orchestra) 1976 hit “Strange Magic” which also is non-linear, impressionistic and artistic.  Both songs lull and float along in their own bubble.

Seattle based The Head and the Heart’s massive hit “All We Ever Knew” was featured on BoomerMusicUpdate  in August 2016.