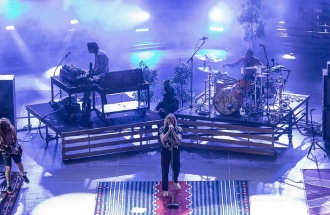 In the mid-80s, Gloria Estefan and Miami Sound Machine were so influential and ubiquitous that their tight and fast, hustle and bustle delivery went mainstream and secured their long-term influence, noticeably in “The Best” by alt fave awolnation.

It’s odd that the Miami/Latin sound circa 1985 would have anything remotely in common with an alt rocker in 2020, but you can hear the melodic connection and hyper intensity between “The Best” and “Conga,” Estefan’s debut, and first hit.

Oh doctor, doctor
I have no clue…

…So fix my face up
With dye and glue

About their name:  AWOL was the high-school nickname for band founder and lead vocalist Aaron Bruno.