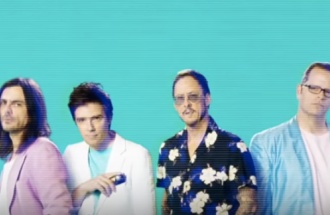 Remember when Weezer covered The Cars 1984 hit “You Might Think” for the animated 2011 movies “Cars 2?”   Written by the late Ric Ocasek, it’s the perfect marriage of a great pop hook and the punch and power of rock, a style that fits both groups.

While waiting for the release of “Van Weezer,” the band’s 14th album, due out in May, loyal fans have gotten their first preview with #3 ranked Alt hit, “The End Of The Game,” which has the same crazy, fun, bouncy, off the wall pop delivery with a rock sensibility as The Cars/”You Might Think. ”

Noteworthy:  Weezer lead singer, songwriter and all around musical whiz Rivers Cuomo points out that there are at least 100 guitar tracks in this song.