Rx for a Pandemic? Let’s Dance! 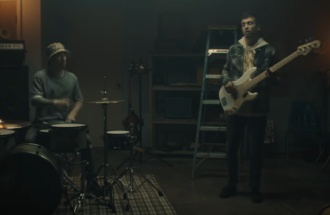 After his mother lamented that she sure could use an upbeat song to distract her from “all this,” twenty one  pilots’ Tyler Joseph (singer/songwriter) and band-mate Josh Dun (drummer/percussionist) wrote, recorded and released “Level of Concern,” which immediately became the most played song on Alt radio, and is also picking up air-time on Adult Top 40 radio.

Wonderin’, would you be, my little quarantine?
Or is this the way it ends?

Joseph tweeted that he thinks the song is “simple but hopeful.”

Panic on the brain, world has gone insane
Things are starting to get heavy, mm

“Level of Concern” is sweet, vague and very danceable; in fact, Variety described it as “a danceable quarantine anthem”—there’s a shared dance DNA between “Level of Concern” and “Stomp” by the Brothers Johnson”(1980)–the songs a have similar melodic energy, too.

Apropos of the times, the video is “from home” and includes the wife and kids, en famille, including an adorable new baby.