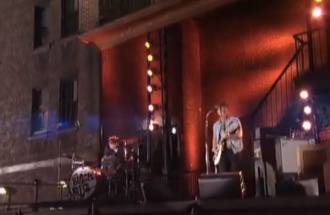 The title of the Black Keys latest hit, “Shine a Little Light,” reminds us of Jeff Lynne and Electric Light Orchestra’s “Shine a Little Love” (Top 10, 1979), and even though their subject matter differs, both songs embody “rock energy,” have some similar phrasing, and are performed by “musician’s musicians”…ELO’s Lynne and The Black Keys’ guitarist/singer Dan Auerbach are known for their originality and openness to new ideas.

“Shine a Little Light” is a rocker that has the tight intensity you’d expect from an indie/blues/garage band, which The Black Keys are, but it’s also polished and smart, with sophisticated production.

Do you feel like you’re the only one living on a prayer?
Have you ever tried to love someone who wasn’t even there?

“Shine A Little Light,” is gaining traction in the Adult Alt format, and is the fourth hit from the album “Let’s Rock.”