“Stop Making This Hurt” Has an 80s, David Byrne Vibe 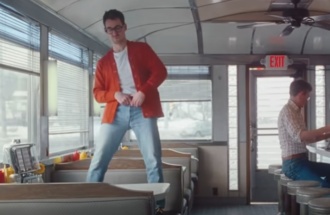 “Stop Making This Hurt,” the newest project from the mind bogglingly creative and talented Jack Antonoff,  performing as Bleachers, his stage name, has a David Bryne/Talking Heads undercurrent (as does the video) that reflects his affection for music from the 70’s, 80’s and 90’s.  It’s fast paced and snappy, although there are also painful tones that echo the title and express what so many have felt during the Covid pandemic;  the story line is…well… your guess is as good as mine. Here’s the first verse:

Daniel puts the kids to bed
And they’re screaming, “Oh, the gods must be crazy”
Well, Jimmy’s on the road tonight
She doesn’t recognize her country
My father’s in the room next door
Crying with his ma at 65
Well every time I close my eyes
I just see it written in big lights

In addition to his own hits, Antonoff is a sought after producer and writer (he’s  collaborated  with Taylor Swift), is proficient in a half dozen musical instruments, and belongs to several different music groups.

After forming his first band (in high school) his group, Fun, scored a #1 hit and won two Grammys  for “We AreYoung” (2013).  Soon after, he started a project that performs under the stage moniker Bleachers.

“Stop Making This Hurt” is a cut from the group’s upcoming album, “Take The Sadness Out of Saturday Night,” set for release late July.

Currently, it’s #15 on the Alternative music chart, and #23 on Adult Alternative.