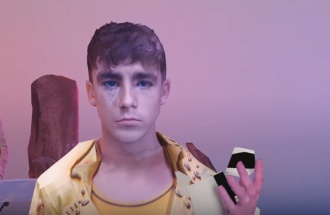 It’s witty, fast, humorous, timely, somewhat socially observant and reminds us of The Kinks 1982 hit, “Come Dancing.”  McKenna’s production and musical style are “Kinks like” and he has a delivery similar to Ray Davies, whose vocals contributed to the group’s “distinctive Kinks sound.” In fact, they sound similar.

Declan McKenna’s is 21 y/o; by his mid-teens he was a pro, and he’s already earned awards and spots at important festivals like Coachella and Lollapalooza.

Reality check: The improbably young, talented, confident and accomplished Declan is the same age as Ray Davies was when the Kinks released “You Really Got Me.”