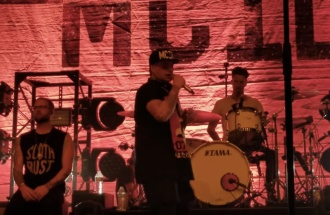 Boomers, we’re not in Kansas anymore, and here’s 4+ minutes to prove it: “16,” by a group called “Highly Suspect.”

It’s dark and scary, leading to the unsettling and emotional moment when a man discovers that his girlfriend has been impregnated by someone else.

It took me sixteen years to find ya
One second to love ya
Seven years to hold ya
One minute to lose ya
Oh, God
Where did I go wrong?

Some radio stations have edited out these lines:

Well I thought I was the father
But baby, it’s not my daughter
‘Cause baby’s a different color
And baby, I’m not a brother

Apparently, it’s a true story, based on one of the band members experience, but even if it’s not true, its convincing and wrenching, dramatic and emotional, especially when you compare it to previous versions of the teen experience i.e. Sam Cooke’s dreamy “Only 16” (1959), which set our Boomer hearts aglow..in 1975 (exactly 16-years later) Dr. Hook added an edge to the same song and voila, a gold record!

Both of those “16s” are cotton candy compared to the “Highly Suspect” track, which is #12 on the Alt chart.