The Name’s the Same… 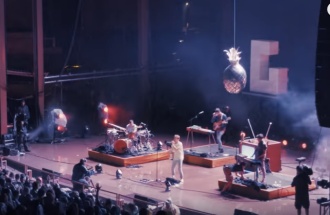 In 1986 “Your Love” by British quartet The Outfield went “Top Ten” on both Pop and Rock charts with their mass appeal hit “Your Love.”

As the lyrics make clear, this “love” is a crass love:

I just want to use your love tonight

As you’re leaving please would you close the door?

Newly released “Your Love (Deja Vu)” by Glass Animals isn’t crass, but it’s not lovey-dovey, either; rather, the storyline is relationship angst with dark and twisty lyrics, however the sound is up-tempo,energized and danceable,and there’s a trippy video companion.

Glass Animals founder/singer and producer Dave Bayley wrote the song, and says it’s personal, a place he’s been and figures others have, too.

Glass Animals have been around for 10 years; their first album “Zaba” (2014) went platinum in the U.S. and they’ve won a slew of UK music awards.  Their style is “Psychedelic Pop.”