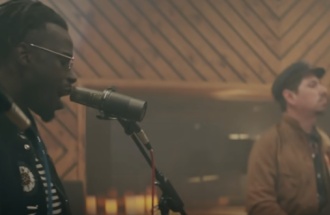 Only a confident band could or would title their song “Fire”–such a high-profile word demands attention and failure would be so noticeable, plus, in addition to being actually incendiary, the word itself sizzles off the lips, intensifying the listening experience.

That approach worked for The Ohio Players in 1975 with their “Fire,” also a scorcher, which reached #1 on both R&B and Top 40 charts–albeit with a different sound and style.

The Black Pumas take their time with a song—their last hit, in Feb., was almost 4 ½ minutes and “Fire” is long, too, another example of the band’s self-confidence, which is totally justified because they totally deliver.

Their soulful vocals, sophisticated pacing, and polished musicianship remind us of how good a good song can be.

Formed in 2018, they are a mix of psychedelic, soul, and R&B. Quesada has Latin funk roots; Burton is from Los Angeles.