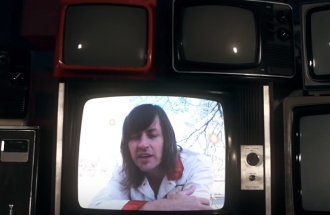 On the one hand, “too much television” inspired Bruce Springsteen’s steamy, sultry, smokey, simmering “57 Channels (And Nothin’ On)” and on the other hand, long time Texas based Country alt-rockers Old 97’s solution to “too much TV” is  a rollicking, frolicking, “let’s move the party to the bedroom!”

In the video for “Turn Off the TV” the band gets goofy, all jumpy and bouncy.  The lyrics are lighthearted:

Turn off the TV, let’s go back to my room
I’ve got a window with a hell of a view
And there’s a full moon sitting on the church next door
Sleeping bag on a hardwood floor

Led by singer/songwriter Rhett Miller, Old 97’s generated music business buzz from the get-go–26 years ago.  Later this month, they’ll drop their 12th album, aptly named “Twelfth.”  “Turn Off the TV” is the lead off single.

About the video:  A wall of “old school” television sets feature career spanning footage of the illustrious band, and a closer look reveals (among numerous other personas) Baby Boomer Rick Nielsen of Cheap Trick fame.

“Turn Off the TV” ranks #25 on the Adult Alt chart this week.