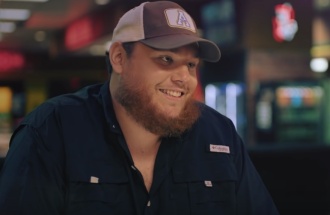 The lyrics to Country music singer/songwriter star Luke Combs’ newest, “Better Together,” are mass appeal–human appeal…it’s a heartfelt ballad about a happy man in love with his woman, and she loves him back.  The vocals burst with emotion.

“Better Together” (#15 on the Country chart) is a sweet, touching, slowed-down love song and it’s likely you’ll be hearing it at wedding receptions and parties for years to come.

30-year old Luke Combs is having a year:  He’s gotten married, won a slew of music awards: Male Artist of the year and Album of The Year from the Academy of Country Music, Top Country Artist at last month’s Billboard Music Awards and  he’s nominated for numerous awards at the CMA’s airing tonight, on ABC 8/7 Central.

Rewind to October, 1982, for another sweet, touching, slowed down love song, that also celebrates happy togetherness, Eddie Rabbitt and Crystal Gayle’s “You And I,” which was both a Country and Pop hit.