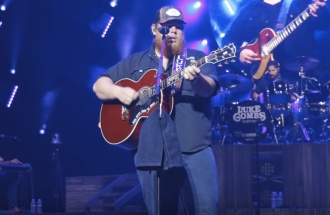 Luke Combs,  the hottest act in Country today, and fellow Country star  Eric Church, who is big, but not as big as Combs, have released “It Does to Me,” a heart-warming, blue-ribbon story-song about an average Joe, who is also an outstanding stand-up kind of guy.

The lyrics and are not inspired, but that’s OK, and we can live with the lines that have too many words jammed into one sentence, because this song isn’t about artistic fireworks, rather, its gift to us is a warm and relaxed feeling of satisfaction and reassurance, like loosening your belt after a delicious home-cooked meal.

Pawned my guitar just to pay his bail

I was the first man standing next to my best friend

But it does to me

That formula–two male Country stars with enough heft to carry a simple, entertaining song with a moral message isn’t new–Toby Keith and Willie Nelson made magic 17 years ago with “Beer For My Horses” — loaded with energy, fun lyrics, and a moral message, it was #1 for over a month.