For Memorial Day:  “The Ones That Didn’t Make It Back Home” 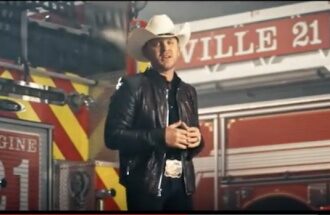 When it comes to patriotic songs with popular appeal, it’s the Country format that delivers.  Since its release in 1984, Lee Greenwood’s “God Bless The U.S.A.” has owned the July 4th airwaves, and from Billy Ray Cyrus’ “Some Gave All,” to Trace Adkins’ “Arlington,” and dozens more in between, it’s Country music that pays tribute.

Add one song more to the list: “The Ones That Didn’t Make It Back Home” by Justin Moore.

Inspired by both his paternal and maternal grandfathers, one who served in the U.S. Navy and one in the Air Force, Moore wrote this ultra “Country” sounding, moving, emotional song that  currently ranks #19 on the Country chart.

Justin Moore:   35-years old, from Arkansas, has had numerous #1 singles.