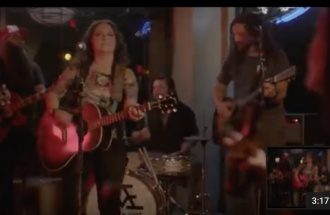 Up and coming Country singer/songwriter Ashley McBryde followed her heart, opting to reject the role of “flavor of the month” route to stardom, and look what happened:

The title song, which is also the single, “Girl Goin’ Nowhere” tells the story of a girl who dreams of being a  Country star, but who is told by her family, friends, and whole community that she won’t make it, that she’ll come “crawling back.”   Here’s McBryde’s retort:

Her songs have well-crafted storylines, with depth and originality. Her clear, honest delivery in “Girl Goin’ Nowhere” recalls Dolly Parton’s 1971 classic “Coat of Many Colors.”

At 35-years old, McBryde has  paid her dues; the single, “Girl Goin” Nowhere,” is gaining traction on Country radio