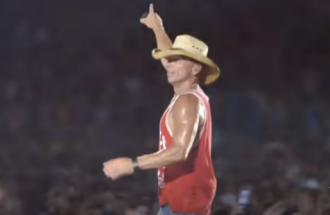 Kenny Chesney’s “Tip Of My Tongue” is #8 on this week’s music chart.  It’s mellow and relaxed, charming, warm and witty, has some hot lyrics, and is the first single from his forthcoming album, set for release next year, and is sure to be a highlight on his set list when he heads out on a stadium tour in 2020, called the  “The Chillaxification Tour.”  Chesney sells out everywhere he plays.

In “Tip of My Tongue,” Chesney collaborated and co-wrote with Nashville’s Ross Copperman (who has written his own hits)* and pop superstar Ed Sheeran.

They don’t sound alike, but, of course, we thought of Brenda & The Tabulations ballad “Right On The Tip Of My Tongue,” an early  70’s soul song with a twinge of doo-wop.