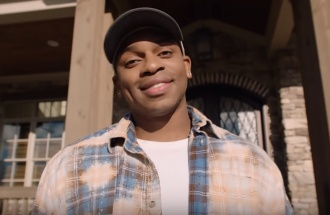 13 years ago, Jimmie Allen left Delaware, moved to Nashville, did the usual dues paying  i.e. sometimes so broke he lived in his car,  got his big break, and voila, “Best Shot,” a Country hit in 2018.

And, now, he’s got his second Top10 and still ascending hit: “Make Me Want To” a melange of modern Country:  an attractive singer with a “nice” voice, a not memorable hook, and bland lyrics.  Allen doesn’t have the gravitas of Johnny Cash, the old-soul of Willie Nelson or the emotion of Merle Haggard, but what he does have is that magic mix of sanitization, bounce, and positive messaging– appealing to all and offensive to none.

As Allen explains it: “it’s a song about a guy that meets a girl and he catches that feeling and he’s not afraid to tell her.”

Nothing wrong with that.  It worked for Hank Williams, way back in 1951,

And the reason it keeps working is because human nature doesn’t change, and when “it” happens, it’s just too much fun for everybody: the lucky couple and those who fall into their orbit, however briefly.

(The video to “Make Me Want To”  has an almost two-minute mini-movie preamble to the song.)