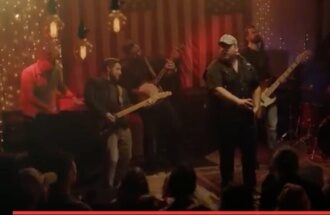 A match made in Country music heaven:  Luke Combs, the hottest act in Country music today, and his latest single, a beer-drinkin’, hard hittin’, red-neck, roadhouse-sounding throwback to the golden age of Country music juke-joint songs. (We’re talking to you, Merle Haggard.)

He goes on to tell of fish that busted the line, beautiful girls who said goodbye, trucks that broke down, and dogs that ran off…

..but, an ice-cold, long-neck “Beer Never Broke My Heart.”

Radio rushed to play the song on-air, and in less than a week of its release, “Beer Never Broke My Heart” was charting top 25; this week it ranks #18.

Singer/songwriter Luke Combs has racked up five consecutive #1 hits from his debut album–that’s a first for a Country LP–the most recent hit, “Beautiful Crazy,” was the biggest of them all. (BoomerMusicUpdate 1/23/19).

He’s 29-years old and is from North Carolina.