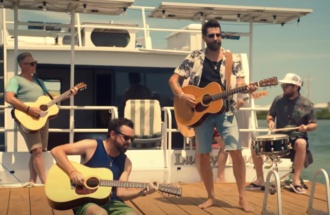 Upscaling the location from pick-up trucks, “the lake,” and barrooms to travel-poster locales of yachts sailing on azure oceans— mostly 20 and 30-somethings, partying, hooking up, drinking and being drunk, is apparently, an antidote to heartbreak, when your partner leaves.  It’s the happiest “break-up song” of 2021.

And I was letting the sun and the rum

Just do what it does

I threw my phone in the water

Little push off the dock

She was packing her bags

I was popping a top

Gone for the weekend or the rest of my life?

The river was rolling

I was getting my float on

She was telling me so long

I was already so long gone

“I Was on a Boat ” the latest  from Old Dominion, one of Country’s hottest groups (they have remarkable everything:  songwriting, singing and performing). The 5-member band has won approximatley 10 Country Music Awards and Academy of Country Music awards combined.

Coinciding  with summer’s official start, just days away, “I Was on a Boat” tells the tale of a guy  drinking tequila and having a boat load o’ fun (literally) even though his girl friend has just broken up with him!

The song kicks off with the hook and goes into a slice of life, a moment in time, something that happened during the day…

Toby Keith’s take on how to deal with rejection is 1999’s  “How Do You Like Me Now?” about how the prettiest girl rejected him, back when he was a nobody, and now he’s a somebody, on her radio every morning.

Both songs that do what Country does so well:  tell a good, high-energy story, with a good hook, and if the singer is good, too, so much the better.