The “Eyes” Have It 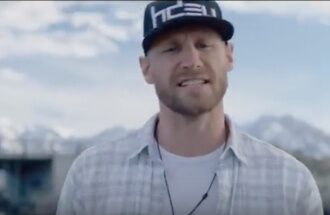 So many songs about eyes:  lying, dying, crying, all formats, genres, languages have songs about the eyes of others, the windows into the soul.

“Can’t Take My Eyes Off of You” was a corny ballad with terrific hooks that was one of the top songs from 1967.

Chase Rice’s “Eyes on You” is also corny with some good hooks; it’s “Pop Country”–charming but bland and predictable: sunsets at the beach, big Montana skies–and yet–the music builds in intensity and energy, and the melody becomes pretty delightful…

Chase Rice is a lucky guy: rugged good looks, a knack for adventure, talent to sing and write hit songs.  His show biz career kicked off with national TV exposure on the reality show “Survivor: Nicaragua;” there was a stint as a member of a NASCAR pit crew, and then he  co-wrote “Cruise,” the first major hit for Florida Georgia Line.

In late 2017 he released his current album, “Lions & Lambs,” and early this month dropped a Worldwide Deluxe edition of the collection.

“Eyes On You” is  currently Top 10 on the Country chart.