The Wonder That is George Strait 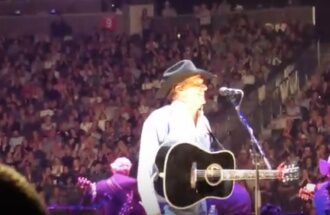 George Strait isn’t now and never was “hip or “cool” in the way that Johnny Cash was or Willie Nelson is–rather he is more like a “Stepford Wife” version of a “Country Star” whose clean living, solid marriage, clever, neo-traditonal songs, strong voice and handsome face propelled him into the Country-Star stratosphere.  He started big, in 1981, and got just got bigger.  He’s sold over 100 million records, worldwide.

Today, Country radio hardly plays artists over 40-years old, exceptions being Kenny Chesney, Tim McGraw, Garth Brooks and Keith Urban… which is all the more reason to marvel… that…George Strait is back!

Age be damned–Strait is 66–within days of its Feb. release, his “Every Little Honky Tonk Bar” debuted in the Billboard Country Top 40 and is currently charting #25.

“Every Little Honky Tonk Bar” sounds exactly like you’d expect, both from the title and also because it’s what George Strait does-there’s a retro, unmistakable Texas honky tonk vibe, plus references to Hank Williams, the man who put honky-tonkin’ on the Country music map.