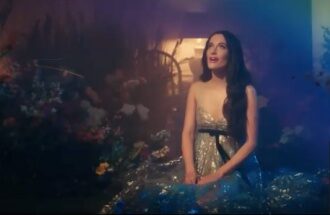 No one was more shocked and surprised to be awarded this year’s Grammy for Album of The Year than the winner herself, Kacey Musgraves.

Although she’s considered one of  Nashville’s most talented singer/songwriters, her songs are hardly played on Country radio stations.

But…her recently won four Grammys have gotten everyone’s attention and her new single, the touching and emotional ‘”Rainbow”,  is generating significant  Country radio exposure, and even some Pop airplay.

Musgraves wrote “Rainbows” six years ago as a message to herself, but offers it as song for “anybody with any kind of weight on their shoulders.”

From “Somewhere Over the Rainbow” to “She’s A Rainbow” and even Kermit The Frogs “Rainbow Connection,” rainbows are powerful imagery in song.

More than 60 years ago, British singer/songwriter Russ Hamilton hit Top 10 on both the Pop and R&B charts with his “Rainbow.”