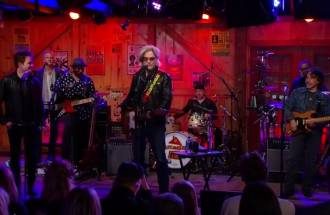 Philadelphia boy Daryl Hall and partner John Oates, who’ve been around since the 70s, are still selling out arenas, their new song is top 15 on the Adult Contemporary and Pop radio charts, and, thanks to MTV’s “Daryl’s House,” Hall is a household name to a new generation of fans.

Now they’ve teamed up with Train, a San Francisco band that’s been around since the 90s, for another s-m-o-o-t-h song that slides and grooves just the old Hall & Oates—only updated.

Train is just as accomplished as H&O (Grammys, double-platinum level record sales), and this new song, “Philly Forget Me Not” is pretty perfect.  Polished and mellow with an edge.