Pop Culture on Steroids: The Goddess, The Teen Heart Throb and “50 Shades of Grey” 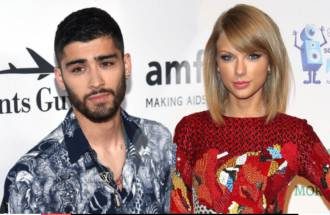 Taylor Swift, Goddess of Everything, has teamed up with Zayn Malik, one of the world’s biggest pop stars (formerly with legendary boy band One Direction), for a song that is on the soundtrack of “50 Shades Darker” the not-yet-released sequel to “50 Shades of Grey.”

It’s all arranged:  by the time “everyone” sees the movie “everyone” will have heard  “I Don’t Wanna Live Forever”  and it will have been, or soon will be, at, or near, #1.

Mass marketing aside, here are two huge talents making music together, their voices a natural blend. It’s pure pop, about the heartache and remorse post-breakup.  They alternate lines– both are equally miserable–unlike that lovely, loving and magical 1989 Aaron Neville and Linda Ronstadt duet  “Don’t Know Much” which was so good it won a Grammy, but it didn’t cause a FRENZY, which is what happened with the Swift/Zayn song:  Within minutes of its release, radio stations nationwide aired it, to playing it as often as every hour or every other hour.

Swift was also one of the writers, so  “I Don’t Wanna Live Forever” has those “Taylor Swift” hip, flip and clever lyrics.