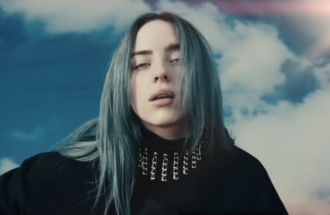 Fifty years ago, when Marvin Gaye addressed climate change in his “Mercy Mercy Me (The Ecology)” it was a tender and lyrical  lament for our abused and beloved mother nature and our beautiful earth.

Today, the issue is at the forefront, and 17-y/o singer/songwriter Billie Eilish, music’s “It Girl” of the moment, is having her say in “All The Good Girls Go To Hell”…

Eilish’s vision is post-apocalyptic, a doomsday-deluxe Mad Max kind of town, sung in a sultry, hushed, distant, and disembodied voice.  The video has gruesome images of harm to a human body, an obvious stand-in for the pain humans are off-loading on and into the earth.

How hot is Billie Eilish?

•  The newly announced Apple Music Awards has named Eilish their “Artist of The Year.”

•  The American Music Awards named her “New Artist of The Year” and “Alternative Rock Artist.”

•  At next month’s Grammy awards, Eilish has five nominations, including song, album, and artist of the year.