Fitz, Without The Tantrums 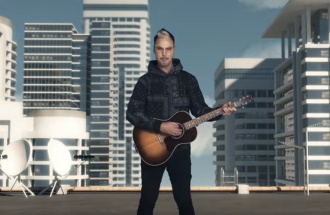 “Persistence!” “Beat the odds!” “Not giving up!” was the theme for British group Chumbawamba, best known for their 1997 top ten “Tubthumping” which was named 1998’s “Best British Single” at the annual Brit Awards, which are the equivalent of our Grammys.

The song’s opening line: “I get knocked down but I get up again” is apropos for the career of Michael Fitzpatrick aka Fitz of Fitz & The Tantrums.

Fitz was 40 before he got his first big success, a decade ago, when the band broke wide open with their breakthrough debut album “Pickin’ up the Pieces.”  “Head Up High” is also apropos for today, as the Covid pandemic is personally challenging to almost everybody.

“Head Up High” is pleasantly forceful, high-energy, and intelligent with a positive message, and ranks #33 on this week’s Adult Top 40 chart.

I get knocked down

Stuck on the ground

Last July, singer/songwriter Fitz turned 50 and next year he’ll a debut his first solo album; the lead single, “Head Up High,” champions his never give up attitude.

The song’s accompanying video is silly, unnecessary, and distracting.  Just watching Fitz perform on stage, his musical integrity and vitality blasting, would have been enough.