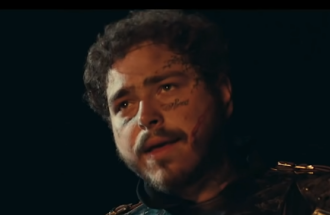 Already a huge international success, “Circles” may be Malone’s most straight ahead pop sounding effort to date — it’s on pace to hit #1 before the end of the year.

The song is subdued but intense; mid-tempo. The lyrics are smart-ish but not insightful.

The video that accompanies “Circles” shows a bleak and ancient battlefield, with Malone, dressed in armor, walking through in a shocked stupor.  Since his song is about a love affair, shall we conclude that this is his take on male/female relations? A  burned-out  battlefield? Let’s hope not, becasuse he’s only 24 years old, and  a roaring success:  he’s  sold 60 million records in the US. alone, and has been nominated for four Grammy awards.