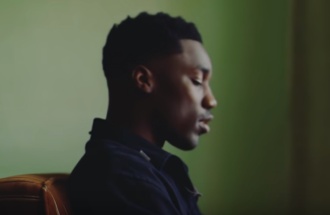 One of the most played song on Top 40 radio last week is about love gone wrong, and newcomer Giveon (pronounced give-ee-on) delivers on “Anniversary of a Heartbreak,” hitting the bullseye via the magic mix of the right lyrics and his superb vocal texture–just the sound of it– expresses the emotional experience that ends a love affair.  “Say you guys are heartbroken on Valentine’s Day, February 14th. Every time Valentine’s Day comes around you kinda revisit the pain and revisit the sorrow. So with this song, I tried to make pain sound beautiful.”
Giveon is a Southern California singer/songwriter and “Heartbreak Anniversary” is his Top 40 debut (although he’s known on R&B.)Failed romance is a pop-music staple,–Ann Peebles’ 1974 hit ,”I Can’t Stand The Rain,” also checked off all the boxes.
“Anniversary of a Heartbreak” is #14 on Billboard’s Top 40 chart, and #7 on Rhythmic Top 40.