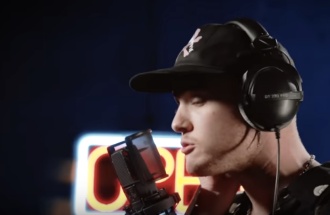 Looking for love, especially after a breakup, is a Pop music staple.

It worked its magic in 1981 with Foreigner’s now classic “Waiting for A Girl Like You,” which spent several months at #2 on the Top 40 chart (blocked from #1 by Olivia-Newton John’s “Physical”).

“Falling,” by singer/songwriter Trevor Daniel is the latest take on the subject.  First released in 2018, it went viral and reached the “Top 10” in more than a dozen countries. This week it’s #4 on the U.S. Top 40 chart and has almost 109 million YouTube views.

It’s a short song, just a tad over 2 1/2 minutes, and the delilvery is R&B-ish and rap-like, a modern mix that’s unfamiliar to Boomers but it you’re young, and listen to Top 40 music, you’ll “get it.”

My last made me feel like I would never try again
But when I saw you, I felt something I never felt
Come closer, I’ll give you all my love
If you treat me right, baby, I’ll give you everything…

Trevor Daniel is 25-years old, and from Houston, TX. He’s been making music virtually his entire life; his debut album, “Nicotine,” came out in March.