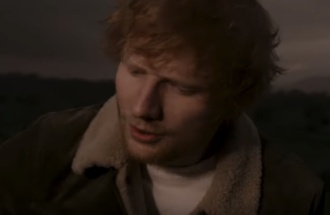 Ed Sheeran is a tremendous talent, an international mega-star whose exceptional melodies and expressions of joy, exhilaration and emotions melt into a sleek, modern interpretation of romance that deeply touches millions of listener’s sweet spot.

Loving and gentle, “Afterglow,” his Christmas gift to fans, is also his first release since becoming a father in August, which he referenced on Instagram :

“…Afterglow is a song I wrote last year that I wanted to release for you. It’s not the first single from the next album, it’s just a song I love, and hope you lovet too.. back to dad land for me now.”

There are some killer lyrics:

Oh, I won’t be silent and I won’t let go
I will hold on tighter ’til the afterglow

..and speaking of romance… how about Chicago’s1984 classic “You’re the Inspiration” ….it’s longer and “softer” than “Afterglow,” maybe even “dated,” but it was the right song at the right time, and it, too, touched millions of listener’s romantic sweet spot.