“The Girl From Ipanema“ is a Hit, All Over Again 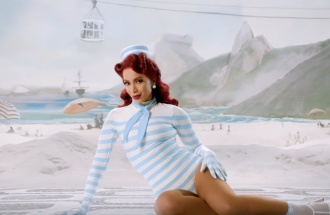 In May, 1964, when the first generation of Boomers (sometimes called Zoomers) were graduating from

high school, one, if not thee, most successful bossa nova songs ever, “The Girl from Ipanema,” was released, winning a Grammy the next year for “Record of the Year” for the writer, the late Antonio Carlos Jobim.   .

Stan Getz was in top form, but it was Astrud Gilberto’s captivating, lush, and lulling vocals that propelled the song into a Top 40 staple.

Fast forward 57 years, and that same melody is now interpolated through a current hit, “Girl From Rio,” by Brazilian singer/songwriter, dancer and actress Anitta.

And today’s audience loves it!

Hot girls, where I’m from, we don’t look like models
Tan lines, big curves and the energy glows
You’ll be falling in love with the girl from Rio

Collaborating with Anitta on the track is hip hop star DaBaby, who holds the title of having the most monthly streams of any artist on Spotify.

Here’s the original and the new version, which is currently #23 on Top 40 radio.