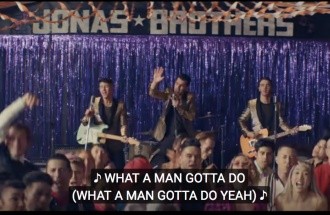 The appeal of an up-tempo pop song has not diminished since Wham! reached #1 in 1986 with “I’m Your Man,” written and produced by the late George Michael.

Filling the niche this music cycle are the Jonas Brothers, who took advantage of their performance at the recent Grammy awards to promote their newest release, “What A Man Gotta Do,” already a Top 40 and Adult Top 40 sensation.

What does a sensational Pop song sound like?  Up-tempo, snappy, makes you want to dance, tap your foot, and smile.  An intelligent, sharp song.

Last year’s reuniting of Kevin, Joe and Nick Jonas made headlines; their first release in six years, “Sucker,” (BMU 3/25/2019) flew to the top of the charts and perched there for weeks–it’s still one of the most played songs on Pop radio nearly a year later.

All signs point to the groups continuing roll in 2020, as “What a Man Gotta Do” is climbing the charts on both Top 40 and Adult Top 40 formats.