Love CCR’s “Lookin’ Out My Back Door?” Then this is for you. 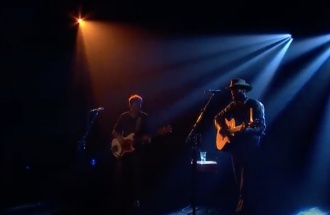 From the moment it opens, “Strong Enough” by brilliant singer/songwriter and Adult Alt fave Ray LaMontagne captures the spirit of Creedence Clearwater Revival:  the rhythm and the beat and the mood and the vibe, plus he’s got John Fogerty-like  gritty, sincere vocals , so If you love “Lookin’ Out My Back Door,” this is a “must listen to“ for you.

LaMontagne sings folk, folk rock, folk blues, plus some soul.  He says his unique sound is because he sings “through his gut instead of through his nose”, obviously not literally, but…whatever…it works, and while there’s CCR level energy and that Fogerty sounding soul, the story line of “Strong Enough” is a downer, unlike the pastoral and down home-y “Lookin’ Out My Back Door.”

Our old man didn’t stick around to see me grown

He was long gone ‘fore the coffee got cold

Wouldn’t even know where to find him

Ray LaMontagne is 47 years old; he’s from New Hampshire; he got serious about music around 1999, and has been getting progressively more recognition, awareness, and nominations for awards.