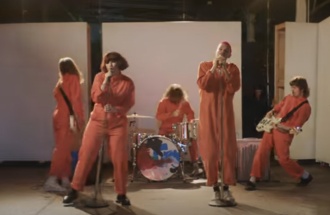 Caught a train
I met a dame
She was a hepster

And a real gone dame

That raw style is still in style, modernized and updated by Grouplove, a Los Angeles based Alternative band that has an apocalyptic lyrical bent:

It’s the future and I’m braindead..

I feel no roots anymore…

Those frenzied bursts are from “Deleter”,  Grouplove’s latest, a high energy track that’s #10 on this week’s Alternative chart.

“Train Kept a Rollin” was an early 50’s jump blues song reshaped in 1956 by Johnny Burnette and the Rock and Roll Trio, and again, in the mid 60’s, by The Yardbirds.

Despite the differences in content, you can hear rock’s wild and unruly roots on the newly released “Deleter.”