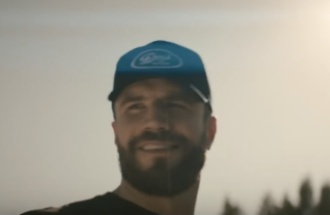 One of our BoomerMusicUpdate favorites, Country star Sam Hunt, has released his long awaited second album, “Southside,” which dropped early this month with the track “Hard To Forget” getting  heavy radio play.

“Hard to Forget” has a few Country song essentials –a sad tale, clever word play–PLUS, woven into it are bits and pieces of Webb Pierce’s 1953 Country classic, “There Stands the Glass,” and even though it’s unlikely that today’s Country audience is familiar with Webb Pierce, he was a super-star in his day, and his heart-rending oldie lends a traditional tone to “Hard to Forget,” and the two songs interact seamlessly.

The effect, despite the Webb Pierce sampling, is  modern country at it’s most polished: slick  and creative production, a chipper, snappy, sassy, easy to listen to song delivered in a not memorable voice by a good looking guy in a baseball cap.

“Hard to Forget” is #17 on the Country chart and #29 on the Adult Contemporary format.