Tones And I: A Name You’ll Want to Know… 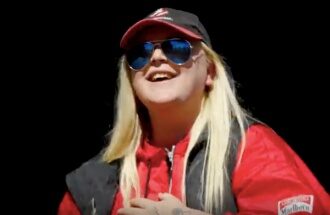 Tones and I is the stage name for 19-y/o Australian singer/songwriter Toni Watson whose “Dance Monkey” is an international hit, topping the charts in over 20 countries and now catching fire Stateside, gathering airplay on three formats:  Alternative ( #20), Top 40 (#24) and Adult Top 40 (#37).

She’s a a creative force of nature, more than the sum of her parts, and a name you’ll want to know if you want to keep abreast of “what’s happening,” not just in music, but the wider world, too.

“Dance Monkey” is uptempo, zippy, flashy, high energy. A club song. The author’s intent was to share her experience as a full-time busker:  like a performing monkey, singing and dancing for coins.

The production is impeccable; the lyrics are special:

They say oh my god I see the way you shine
Take your hand, my dear, and place them both in mine

I said oh my god I see you walking by
Take my hands, my dear, and look me in my eyes

Even for a Boomer who grew up listening to a wide variety of hits on Top 40 radio –from the silliness of Alvin & the Chipmunks to the anger of Barry McGuire’s “Eve of Destruction,” Tones and I’s style is “unique.” She doesn’t have  a singer’s voice, but then, neither does Bob Dylan.

The video is also unusual; the star is dressed as a man in a fat suit, and never shows her true self.

About that title —a song needs a good hook, for sure, but, maybe throwing the word “monkey” into the title can add an edge?

It worked for Chuck Berry/”Too Much Monkey Business” and for The Miracles /”Mickey’s Monkey” in the the 60s and for Peter Gabriel/ “Shock The Monkey” in the 80s, all of which pale next to the granddaddy of song titles with the word “monkey” in them: 1964’s “Monkey Time”–that’s when Major Lance taught us the dance.